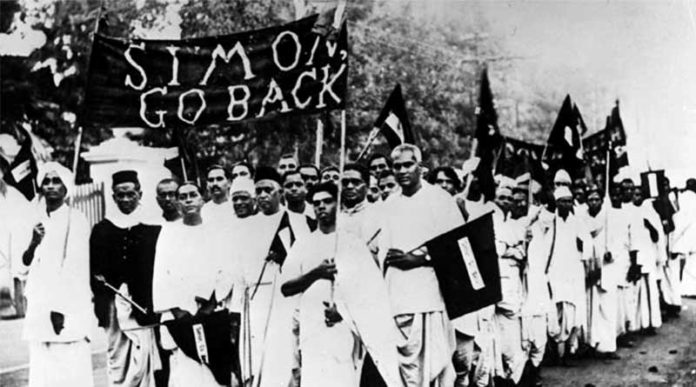 As per the provisions of the GOI Act 1919, the Simon Commission visited India in 1927 to investigate the progress of the government scheme and suggest new steps for reform. Such a commission was to be announced in 1929 {after 10 years of GOI Act} but the conservative government in England advanced its date in view of the tumultuous political condition of India. This commission had no Indian members, and all seven members were from three political parties of Britain. This gave a very good opportunity to Congress to have an agenda.


They protested that Simon commission was there to deprive them of their right to participate in the determination of the constitution of their own country. In the Madras session, the congress passed a resolution which advocated the boycott of Simon Commission at every stage and in every form.

At the same time, the Muslim league was divided on the commission. While Mohammad Ali Jinnah supported the boycott of commission, Mohammad Shafi supported the government. Thus, all parties except Shafi group of Muslim League and Justice Part of Madras were against Simon Commission.

When it arrived at Bombay on 3rd February 1929, the Simon Commission was greeted with strikes all over India. Wherever it went, it was welcomed with black flags and shouting “Simon Go Back“. The Government used coercive methods to break down the boycott unsuccessfully. At Lahore, Lala Lajpat Rai organized a massive protest and was fatally wounded in lathi charge.

The Indians alleged that the implicit objective of the Simon Commission was to delay the process of transfer of power and widen the community feelings by provisions that could be opposite to the interests of two communities. It did not propose a universal franchise and did not propose financial devolution.

Note: “Simon Go Back” and ” Quit India” both slogans were penned down by Yusuf Meherally